Asia Bookroom has a large premises in Canberra, Australia's capital city. As well as our regular retail shop we run a busy mail order business sending well packed parcels across the world.

Asia Bookroom stands on the traditional lands of the Ngunnawal people. We acknowledge and respect their continuing culture and contribution they make to the life of the Canberra area.

At the core of our philosophy is a committment to literacy and transfer of knowledge. To this end Asia Bookroom and its customers raise funds at our regular events for the Indigenous Literacy Foundation. In the last two months of the year funds are raised through our Christmas Tree to support Classrooms in the Clouds in Nepal.

We issue regular short lists of books, tailored to your specific areas of interest, emailed to you as they become available. These lists include a range of antiquarian, out of print and some news books.

At Asia Bookroom we recognise that your areas of interest can change over time, so if at any time you would like to modify your subscription to our E-Lists please just let us know. We issue a wide range of E-Lists on a variety of regions, countries and themes, and can quickly and easily send you our list of options from which you can make your selection. Alternatively, you can email us your new areas of interest and we can add you to the most relevant E-List/s.

At Asia Bookroom we are Asia specialists, making information on all aspects of Asia available to you! 40 years of experience has equipped us with broad knowledge and sources. Our online store and international delivery mean we can deliver your parcel to you anytime, anywhere.

Asia Bookroom (formerly The Old Bookroom) was established as a branch of Weekend Gallery Books Pty Ltd in July 1982. Since the late 1960s Barbara Burdon had been operating Weekend Gallery (as it was originally called) from a converted flat underneath her house in the Canberra suburb of Hughes. In the early days it sold only antique prints and maps and some reproductions. A chance buy at a local auction was the catalyst for Barbara's bookselling career. She and her husband Tom were attending the auction with the hope of buying some prints and maps. During the viewing they had also looked at the books that were to be sold. They saw a fine library of history, literature and reference. Although their intention was only to bid on a few lots of books for personal interest, by the end of the auction almost all of the books offered were theirs. Gradually over the next few years the books overtook the prints and maps as the mainstay of the business and Weekend Gallery became Weekend Gallery Books.

Weekend Gallery Books, as the name suggests, was open at the weekends and by appointment during the week. During the early 1970s Barbara bought a library of books on China. This marked the beginning of the emphasis on travel, in particular Asian, Middle Eastern and African travel, which is one of the most distinctive characteristics of the business to this day. As Barbara and Tom had lived and travelled in a number of Asian countries this collection was an exciting departure that they intended to build on. Tom Burdon was a marine biologist and his work had taken him to many parts of the world. He was Deputy Director of Fisheries Singapore and Malaya in the early 1950s and wrote a number of publications describing the fishing industry of the area at the time. There is a lovely vignette in F.D. Ommanney's Eastern Windows which describes Tom's work in Singapore at that time.

"...Tom was a man of great energy and real ability in the middle thirties. He had been in Singapore for three years, and in that time, by sheer driving and hammering, by ceaseless churning out memoranda, he had succeeded in building up an organization the value of which was known and recognized by the fishermen themselves. There can hardly be a greater tribute than that, for fishermen as a rule are apt to despise and resent anything in the nature of Government control or interference. But when Tom's contract came to an end after three years the fishermen sent a petition to the Government expressing their appreciation of all that he had done and begging for his services to be retained..."

The 1970s saw the gradual build up of Weekend Gallery Books. Barbara Burdon joined ANZAAB, the Australian and New Zealand Association of Antiquarian Booksellers within a few years of its inception and began exhibiting at the bookfairs run by the Association in Sydney and Melbourne and issuing catalogues. The mail order side of the business had begun. Tom's ill health meant that he could no longer play a part in the business although his vital enthusiasm, imagination and work in the first years were the base from which all else has grown.
In 1982 Barbara's youngest daughter, Sally, returned from living in England and Ireland. Sally had always been interested in the business and it was decided that this would be an ideal time to expand. Thus Asia Bookroom - then known as The Old Bookroom - opened in the Belconnen Churches Centre in July 1982. Since this time it has expanded considerably. Asia Bookroom recently moved into its fifth premises - 9 times the size of the original shop.

Asia Bookroom As It Is Today

Over the years the business has grown and changed enormously. Fortunately, Sally's husband, Martin Nagle, runs InfoMining, an Information Technology company which works with book businesses providing very sophisticated software. Asia Bookroom has been the happy Beta tester for this most comprehensive and effective program.

Sadly Barbara Burdon died in March 2013 at the age of 88. We feel very fortunate to have had her in our lives for as long as we did. She left a special legacy in the form of Asia Bookroom which Sally runs and in the other book businesses run by two of other children, Elisabeth Burdon, Oldimprints.com in Portland, Oregon and Jonathan Burdon, Pilgrim Books in Melbourne. Jonathan is also married to antiquarian bookseller Kay Craddock. 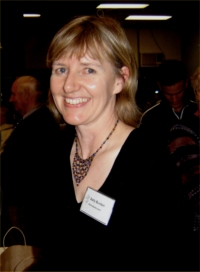 Sally grew up against the background of a growing book business, meaning in effect that she was a bookseller in training from the age of 10. In 1982 after a period of living overseas, she returned to Canberra and started working full time in the family business. With the many changes that the business has gone through (and the world has gone through!) since then it is a very different job and the business is very different. The internet has of course made a great difference and the change to dealing only in books on Asia made about 15 years ago has also kept Sally far from bored!

Sally has always been intrigued by the history and culture of Asia and the Middle East, and has travelled in India, East Asia & Southeast Asia. She is also very passionate about the multi-cultural nature of Australia today and believes in a small way that Asia Bookroom can postively contribute to Australian society, in particular through the many events and the book group discussions held at Asia Bookroom

"We are so lucky to live in this part of the world, with the energy and special feel that our culturally diverse country has. We need to nurture this and one of the best ways to do this is by promotion of knowledge about our region and the people who live in it. As history shows us, time and time again, freedom and diversity are very special fragile things. We need to work at it and guard it carefully" Sally stated when asked about what the driving force behind the business is.

The events that Asia Bookroom runs on a regular basis throughout the year help achieve this end. Another passion is exciting children about Asia - and with the wonderful books that are now available for kids it is a relatively easy task! Check out our children's books to get a taste of this!

Sally is equally serious about bookselling as a trade where expertise is required. She is a past President of the Australian and New Zealand Association of Antiquarian Booksellers and is currently serving as a President of the International League of Antiquarian Booksellers (ILAB). She sees the role of the bookseller as much more than just selling books. Advising general readers, collectors and libarians on the best title or titles and, vitally, careful description and research, of secondhand and antiquarian items that Asia Bookroom offers for sale are just the beginning.

Sally reads widely on Asia - fiction and non fiction and given half a chance will discuss her current favourite Asian books any time you call in.