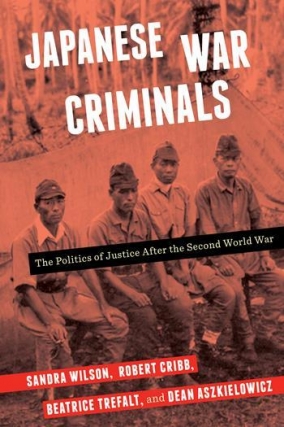 Launch by Professor Michael Wesley, Dean of the ANU's College of Asia and the
Pacific of

"I cannot think of a similar work with such a broad scope...This book is a product of an enormous, novel, research effort and it shows..."

All four authors of this important book - Sandra Wilson, Robert Cribb,  Beatrice Trefalt and Dean Aszkielowicz - will be in-conversation at Asia Bookroom on July 17th - don't miss it!

Beginning in late 1945, the United States, Britain, China, Australia, France, the Netherlands, and later the Philippines, the Soviet Union, and the People's Republic of China convened national courts to prosecute Japanese military personnel for war crimes. The defendants included ethnic Koreans and Taiwanese who had served with the armed forces as Japanese subjects. In Tokyo, the International Military Tribunal for the Far East tried Japanese leaders. While the fairness of these trials has been a focus for decades, Japanese War Criminals instead argues that the most important issues arose outside the courtroom. What was the legal basis for identifying and detaining subjects, determining who should be prosecuted, collecting evidence, and granting clemency after conviction? The answers to these questions helped set the norms for transitional justice in the postwar era and today contribute to strategies for addressing problematic areas of international law.

Examining the complex moral, ethical, legal, and political issues surrounding the Allied prosecution project, from the first investigations during the war to the final release of prisoners in 1958, Japanese War Criminals shows how a simple effort to punish the guilty evolved into a multidimensional struggle that muddied the assignment of criminal responsibility for war crimes. Over time, indignation in Japan over Allied military actions, particularly the deployment of the atomic bombs, eclipsed anger over Japanese atrocities, and, among the Western powers, new Cold War imperatives took hold. This book makes a unique contribution to our understanding of the construction of the postwar international order in Asia and to our comprehension of the difficulties of implementing transitional justice.

What Reviewers Have Said:

"This exemplary work of collaborative scholarship represents a genuine breakthrough in our understanding of the processes behind, and consequences of, Allied efforts to prosecute Japanese war crimes in the aftermath of the Second World War. Drawing on archival sources gathered from all corners of the globe, it not only provides an impressive overview of the thousands of individual trials conducted by the Allies across the Asia-Pacific region, but also details the complex tangle of considerations that resulted in the release of all remaining prisoners by the end of 1958. Rejecting the simple opposition between politics and justice that has so often been used to frame discussions of the trials, it instead offers a deeply compelling account of the moral, legal and practical dilemmas that haunt every episode in this profoundly important history."  Daniel Botsman, Yale University.

"I cannot think of a similar work with such a broad scope...This book is a product of an enormous, novel, research effort and it shows. The authors illustrate the development of an Inter-Allied system of legal assistance for purposes ranging from the transfer of evidence to suspects and prisoners developed from 1946 and which worked until 1959. It makes for a fascinating account of international cooperation."  Neil Boister, University of Waikato.

"The Allied authorities meted out retributive justice to thousands of Japanese war criminals in the immediate aftermath of World War II. However, "the sentences were only the start of a new phase in applying justice to war criminals," so this book warns us, and compels us to consider the implications of the complex interplay of domestic politics and diplomacy that led to the eventual release of all convicted war criminals."  Yuma Totani, University of Hawaii.

Sandra Wilson is professor of history in the School of Arts and a fellow of the Asia Research Centre at Murdoch University. She is the author of The Manchurian Crisis and Japanese Society, 1931-33 (2002).

Robert Cribb is professor of Asian history at the Australian National University. He is author (with Li Narangoa) of the Historical Atlas of Northeast Asia: Korea, Manchuria, Mongolia, Eastern Siberia (Columbia, 2014).

Beatrice Trefalt is senior lecturer in Japanese studies at Monash University. She is the author of Japanese Army Stragglers and Memories of the War in Japan, 1950-1975 (2003), and coeditor, with Chris Dixon and Sean Brawley, of Competing Voices from the Pacific War (2009).

Dean Aszkielowicz teaches at Murdoch University and is the author of The Australian Pursuit of Japanese War Criminals, 1943-1958: From Foe to Friend (Hong Kong University Press 2017).