The global pandemic has affected the sending of parcels to many parts of the world causing, in some cases considerable delays. More information can be found on the Australia Post website. To help minimise the delays we recommend choosing the Express post option for orders from outside Australia or ask us to quote you for the cost of a private carrier.

Australian orders are being delivered with little or no delay. 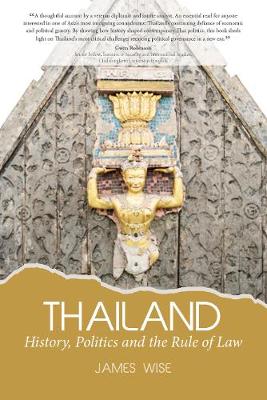 Entry by gold coin donation to the Indigenous Literacy Foundation

in Conversation with Hal Hill

Thailand: History, Politics, and the Rule of Law

Why has Thailand had so many coups? When will the political situation in Thailand become more stable?

Since 1932, Thailand has had 12 military coups and 17 constitutions.  Over the same period, this puzzling country has pulled tens of millions of its people out of poverty.

This introductory book on Thai politics and the rule of law explains why chronically unstable Thailand has struggled to settle its political disputes, and why the promise of a more democratic future in 1997 Constitution failed to stop the cycle of coups.

The author focuses on the continuities between the pre-1932 and a post-1932 periods, including the emergence of a five-branch form of government, with the monarchy and the military exercising authority in their own right, often without reference to the legislature, executive and judiciary.

Thailand’s governance was re-cast ambitiously in the 1890s, 1932 and 1997.  Since 1997, political disputes have become more acute and the absence of a national consensus on how to settle them more obvious.  Can governance again be re-cast?  Or will Thailand’s political instability and cycle of coups continue?

About the Author: James Wise was Australia’s ambassador to Thailand from 2010 to 2014.  He was also posted to Bangkok from 1995 to 1998. His other postings were to Kuala Lumpur, Moscow and Port Moresby. He now divides his time between Bangkok and Canberra.  Researching and writing this book has been his major preoccupation since retiring in 2014.

James Wise will be talking with Hal Hill. Hal Hill is the H.W. Arndt Professor Emeritus of Southeast Asian Economies at the Australian National University.